Your first intuitions in Wisconsin might be to check what was happening in Ohio to see if things are the same. On a couple of counts, they are.

There is a very strong relationship between non-college rate and Republican shift by county, in Wisconsin as in Ohio. Taken together, these two series have an r-squared of 0.65 and a p value of 6.09 * 10^-38, which are very decisive “this is not random” metrics.

And this is the same stronger-than-nationally trend we saw in the Ohio case.

But mining doesn’t appear to be a factor because Wisconsin mining employment is de minimis in a state of 5.8 million people.

So where did the Dem votes change?

Just like Ohio, Dem turnout plunged across the board from 2012. The best Dem showing was a 6% gain in Ozaukee, with two other counties (Dane and Waukesha) being near zero and most places being a 20% drop or more. Milwaukee is especially troubling, because Milwaukee alone holds about 16% of the voting-aged population.

Where is the manufacturing? 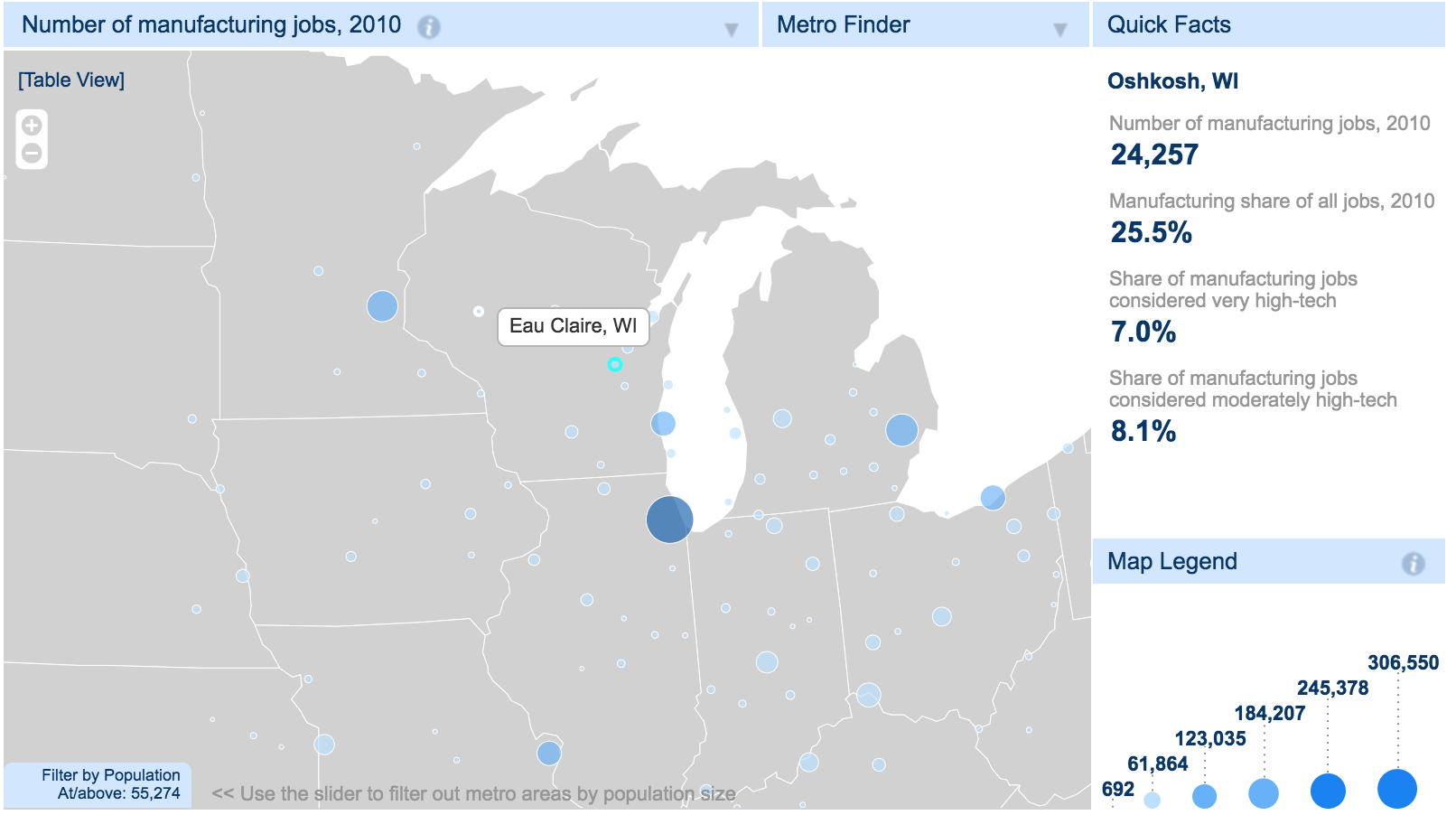 The two big shortfall areas for Dems in terms of voters were the Appleton/Oshkosh area, (that blotch in the middle of the state,) and Milwaukee in the southeast. Manufacturing concentrates in population centers, so this is not super surprising, but combined with the noncollege rate vs shortfall in turnout the data may suggest that declining labor prospects influenced votes.

What Kinds Of Counties Mattered? 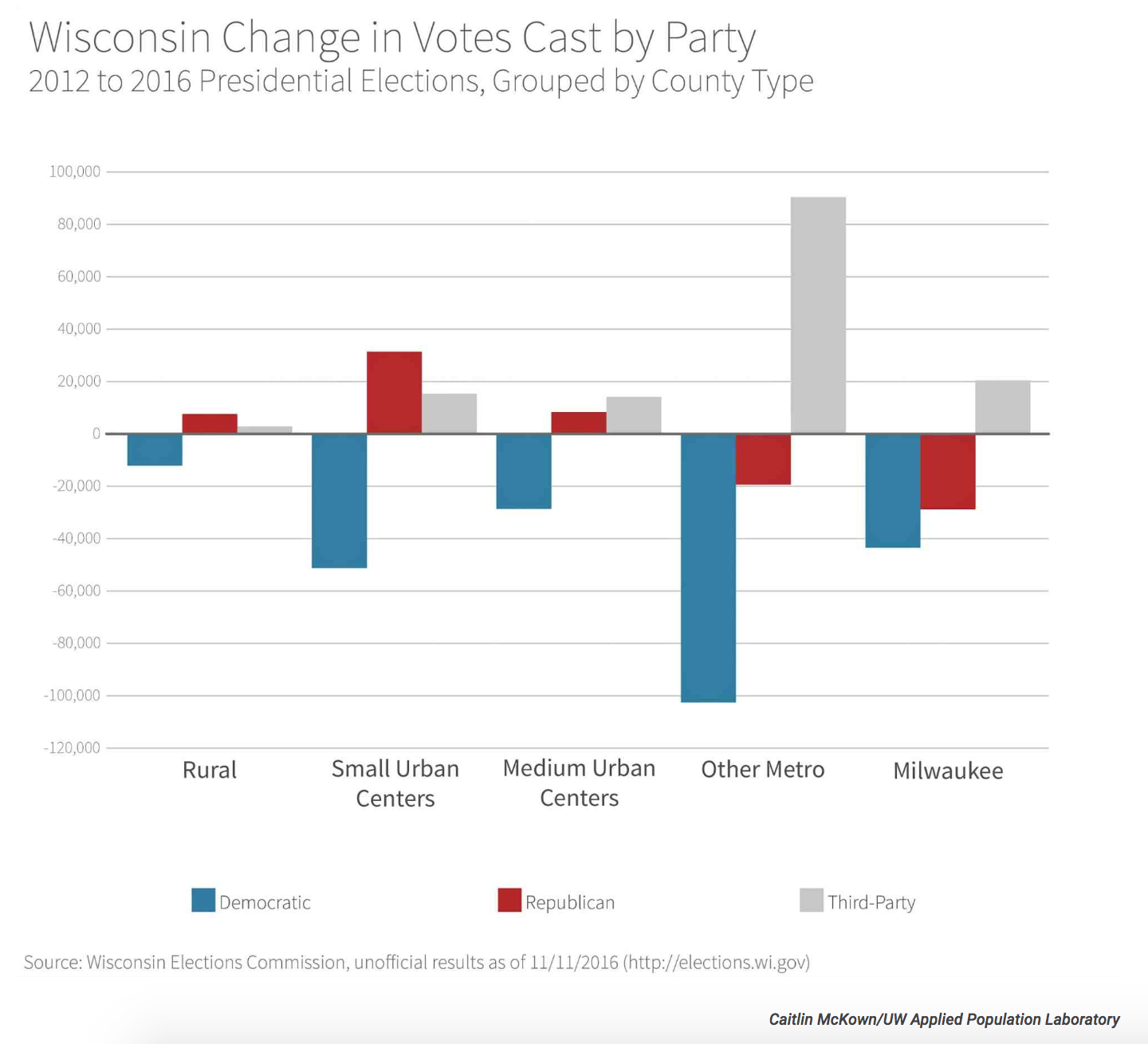 Dem support fell apart across the state, and Milwaukee was the biggest single-county contributor, but the next-largest tier of counties by population caused a larger vote loss by far. 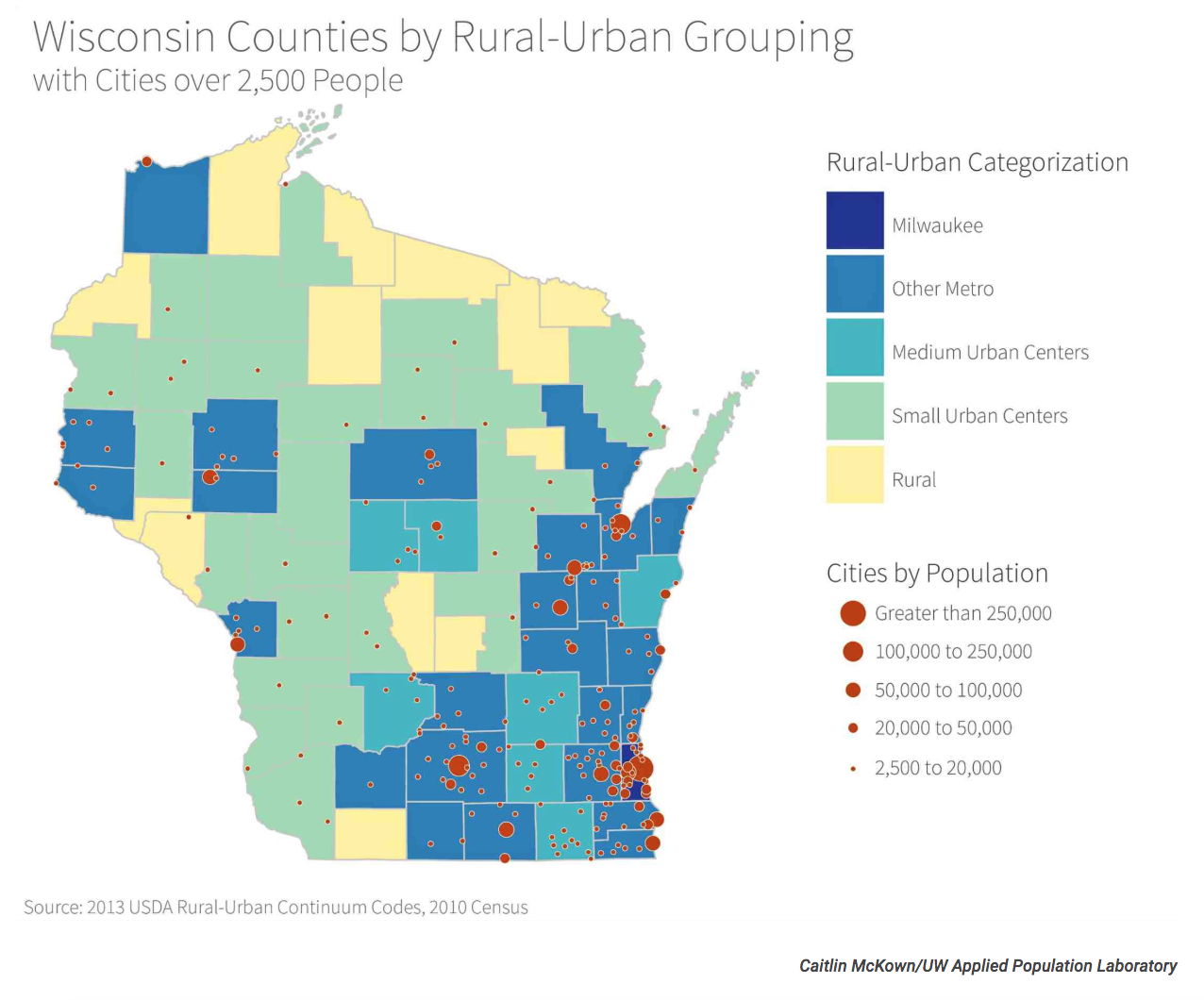 Interestingly, there was extensive 3rd party voting in the Other Metro counties, which made the biggest difference in Clinton’s outcomes. (Clinton needed to lose roughly 200K votes compared to the Obama 2012 total, and half of that came from the Other Metro category.) There are several possible stories here, considering that Libertarian (and Republican governor) Gary Johnson took 100K of the 3rd party vote and Jill Stein took only 31K:

Turns out this is what we see:

It looks like Wisconsin is functionally tied in non-Obama years, but that in 2008 Obama may have flipped moderate Republicans and had some residual enthusiasm in 2012. This lends circumstantial credence to #3, an Obama flip-effect wearing off.

There is one highly plausible explanation for lower Dem enthusiasm in 2016 compared to 2012. This is the map of candidate vists to Wisconsin in 2012. Note the darker blue pins in Madison, Milwaukee, and Green Bay, which represent visits by Obama during the 2012 campaign.

Candidate Visits to WI in 2012 (Dark Blue is Obama) 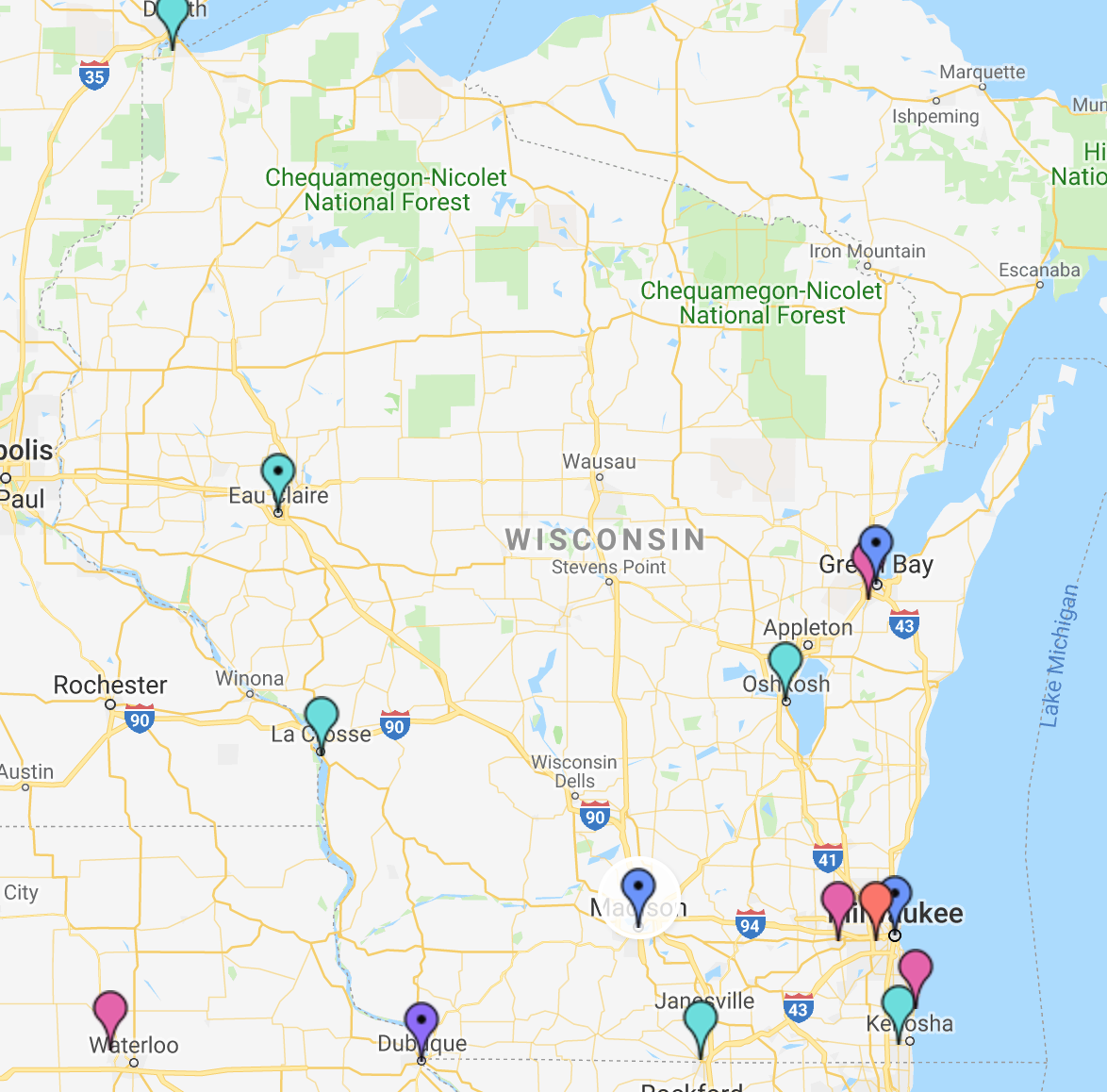 This map, produced in 2013, also happens to show the visits by Hillary Clinton as the candidate in 2016, because there weren’t any.

If having the candidate visit your state energizes voters and increases turnout, (which is probably true given how much time candidates spend on those events,) having fewer campaign visits in 2016 probably hurt Dem turnout overall compared to 2012. It has been rumored that the campaign consciously chose to not visit Wisconsin because they thought increased exposure of the candidate decreased support, but that is again a “Dems losing the state, not Reps winning it” scenario.

Sadly, there is one last big factor to consider in Wisconsin specifically: voter suppression. 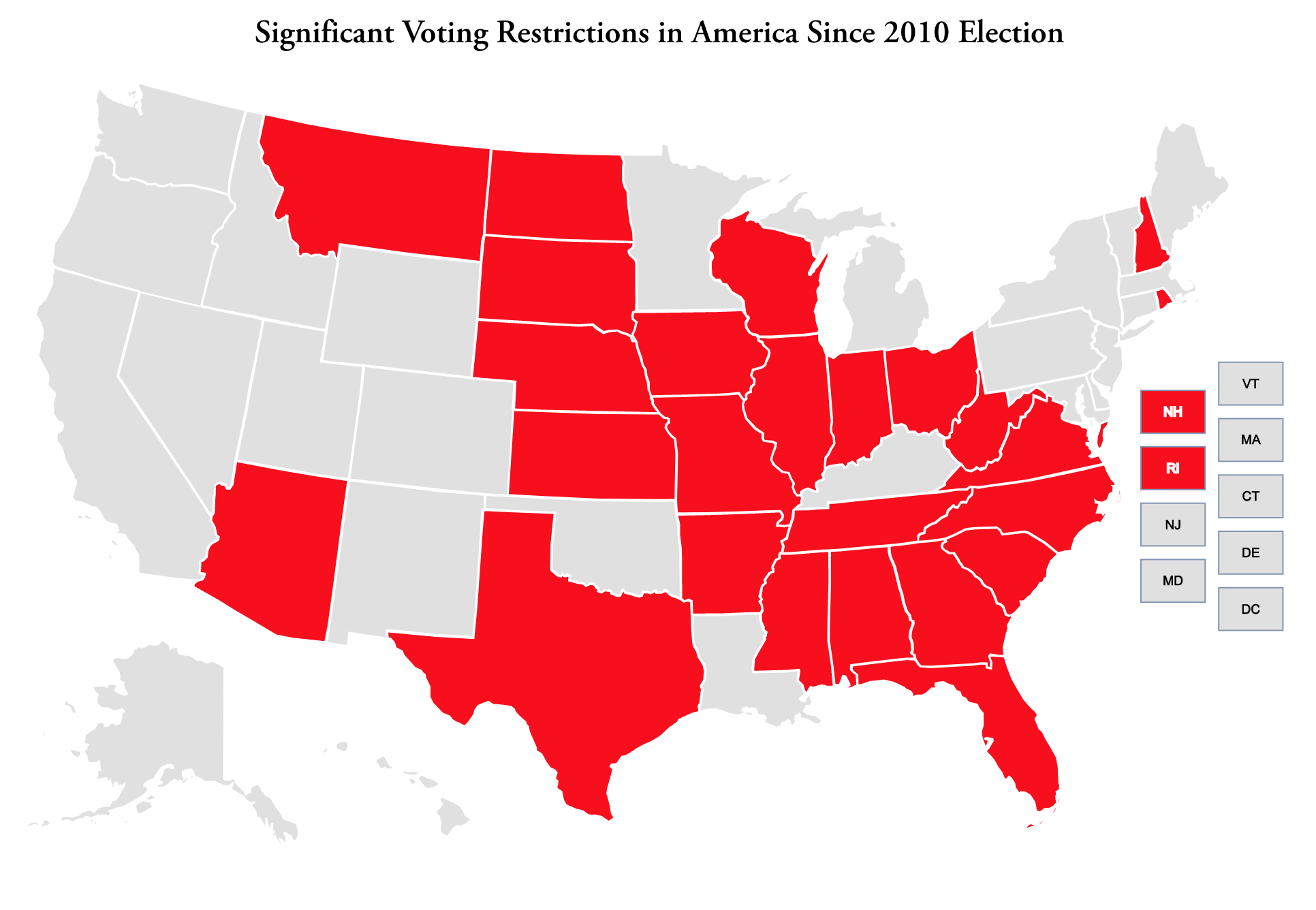 This map shows which states had new restrictions on voting, like voter-ID laws, in place since 2010. Note that Wisconsin is included, with laws effective 2014, and there is reason to believe the Wisconsin laws were targeted at likely Democratic voters2:

A trial over Wisconsin’s voting laws kicked off Monday with a former aide to a Republican state senator testifying that GOP senators were “giddy” over the prospect the state’s 2011 voter ID law could keep some people from voting.

“She got up out of her chair and hit her fist or her finger on the table and said, ‘Hey, we’ve got to think about what this would mean for the neighborhoods around Milwaukee and the college campuses,’” Allbaugh said.

Some of the restrictions were struck down3, but they still had an impact.

How much voter suppression happened in Wisconsin?

Different sources give different estimates based on their own work. Some initial hysteria estimated 300K votes suppressed, while other sources claimed it was 200K: 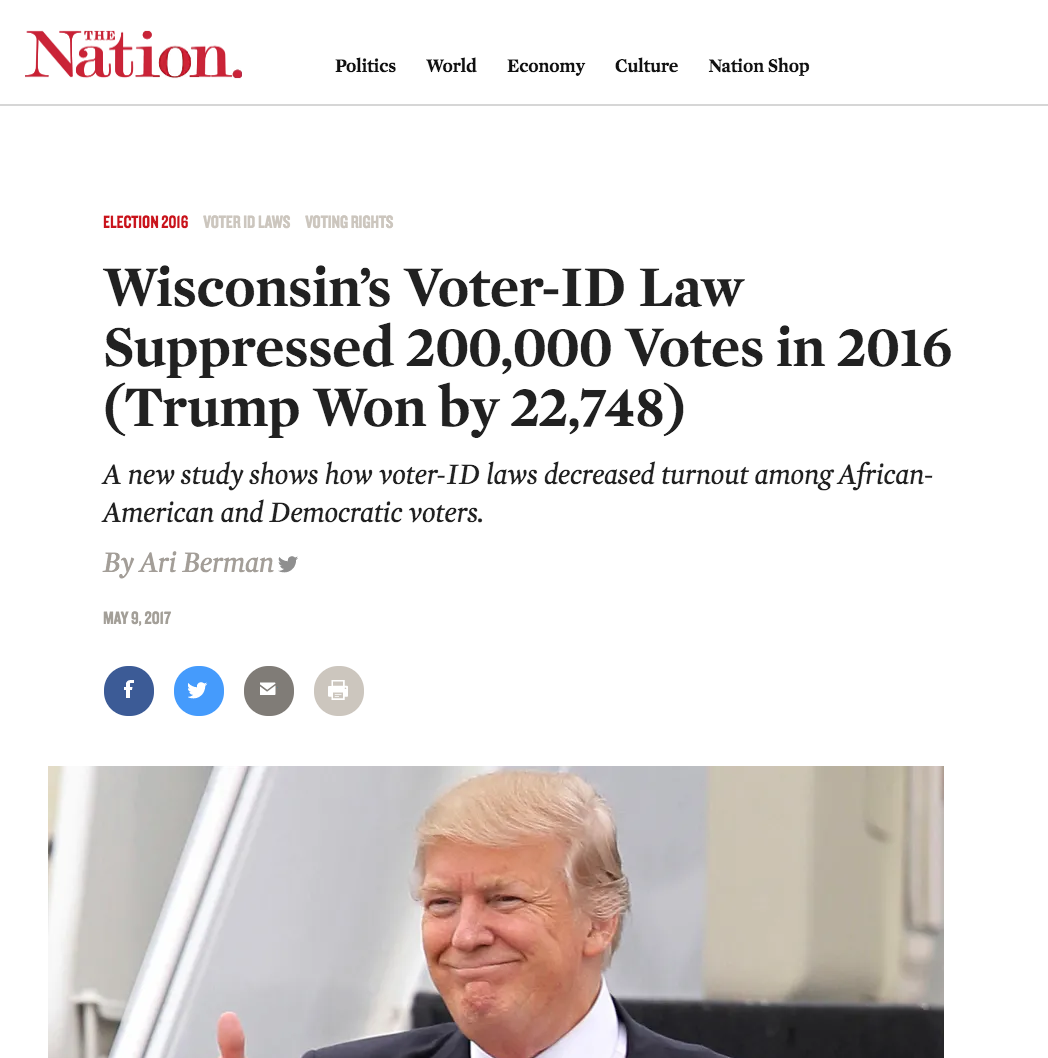 However, via The Elections Research Center at University of Madison-Wisconsin:

But we can construct a comparison to sanity-check.

Was voter suppression a big factor? Compare with Minnesota

Trump’s margin was 22,748 votes, so the high value from that study would flip the state. However, we can compare Wisconsin to its neighbor Minnesota, which had no new voting restrictions, and see a very similar decline in Dem votes (and surge in 3rd party votes):

Observe the same story as Wisconsin: nearly identical 2012 and 2016 Republican votes, and a big drop-off in Democratic votes. These states are neighbors, and demographically pretty similar; they probably experienced declining Democratic voting for similar reasons, and only one state had restrictions. These restrictions probably did not produce the majority of the Democratic vote decline.

The X axis here is % change in turnout. The bars and lines show inferred distributions, the ticks are specific data points.

Observe that the D percent changes top out near zero, while the R percent changes have a couple decreased turnouts but generally positive turnout. (The mostly-neutral turnout D turnout changes are in core-demographic areas like big cities.)

A few more states, then the end

Just like in Wisconsin and Ohio, Minnesota was a sea of red produced by declining Democratic votes in 2016 compared to 2012, with no major uptick to counterbalance the shift.

There is no evidence that the kind of fraud voter-ID laws prevent is at all important, according to several studies. However, there is evidence of a concerted effort to use voter-ID laws to disenfranchise voters that don’t vote with Republicans.2 For more reading, consider here.

Further, the fraud that voter ID laws would stop doesn’t make much sense. Why show up in person where you can get caught just to cast a single vote, when you can instead use other people’s absentee ballots? Clearly you can get many more fraudulent votes per hour that way. The trick is that this question doesn’t have an answer; showing up in person without an ID is a dumb way to commit fraud, which is probably why there are so few cases of it. (And of the 30 cases in 1 billion votes there are, many are relatives voting in the spirit of the correct voter.)

It is pure villainy to seek election by denying your opponents votes, and as far as my research shows:

Don’t just judge an idea on how it sounds. Inspect how it operates in the real world.

And maybe consider talking to the politicians that have supported these policies. If they have evidence, learn about it, and if not explain why their policy is odious. In Wisconsin,

“Grothman said, ‘What I’m concerned about here is winning, and that’s what really matters here. … We better get this done quickly while we have the opportunity,’” Allbaugh said.

“I’ve characterized it as giddy and that’s part of what bothered me so much,” Allbaugh testified.

Allbaugh named two other senators — Leah Vukmir and Randy Hopper — as being gleeful over passing the bill.